The goal of this proposal is to add a new compiler directive go:wasmexport to export Go functions when compiling to WebAssembly.

This directive is similar to the go:wasmimport directive proposed in https://golang.org/issue/38248.

Wasm is a technology that allows users to execute instructions inside virtual machines sandboxed by default, that is the Wasm user by default cannot interact with the external world and viceversa.

Wasm can be used in very different contexts and, recently, it's becoming more and more used as a technology to extend, at runtime, software running outside browsers.

In order to do that, the extensible software provides to the “extension developers” ad-hoc libraries to develop Wasm modules.

Thanks to an ABI well-defined, the extensible software will be able to access to the compiled Wasm module and execute the extension logic.

Some systems that adopt this extension mechanism include Istio and OPA.

While the latter need is already covered and implemented by the issue https://golang.org/issue/38248, this proposal tries to address the former need.

As a complete example, assume there is a system that triggers some signals and that can be extended to develop applications based on these signals.

The extension module is intended to be used just as “signal handler”, maybe with some lifecycle methods (e.g. start and stop) to prepare the environment and to teardown it.

The extension module, from a host perspective, is an actor that needs to be invoked on every this use case the module

When the host wants to start using the module, the start export is invoked.

start in its logic spawns, using the go instruction, a goroutine that loops on a global channel, like:

Then each export eventually push messages in this eventsch:

When process_a export is invoked, the value will be pushed inside the eventsch and the goroutine spawned by start will catch it.

In other words, the interaction between host and module looks like this: 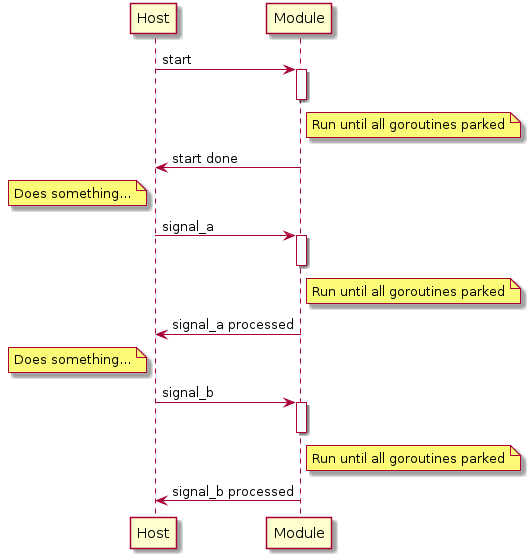 A new directive will allow users to define what functions should be exported in the Wasm module produced by the Go compiler. Given this code:

The compiler will produce this Wasm module:

Note that the first 3 exports are the default hardcoded exports of Go ABI.

Every time the module executor (also called host) will invoke the hello_world export, a new goroutine is spawned and immediately executed to run the instructions in HelloWorld.

This wakes up the goroutine scheduler, which will try to run all the goroutines up to the point when they are all parked.

When all goroutines are parked, the hello_world export will complete its execution and return the return value of HelloWorld back to the host.

The exported function can contain in its signature (parameters and return value) only Wasm supported types.

The functionality of defining exports already exists in Go, through the Go JS ABI. The cons of syscall/js.FuncOf are that is not idiomatic for Wasm users and assumes that the host is a Javascript environment.

Because of the issues described above, It's complicated to support, from the extensible system perspective, Wasm Go modules, because it requires “faking” a Javascript environment to integrate with the Go ABI.

This approach doesn't mandate any particular interaction style between host and module, nor the underlying threading system the host uses to execute the module.

In fact, as of today, every Wasm module just assumes the underlying execution environment, that is the virtual machine that executes Wasm instructions, as sequential. There is no notion of parallelism.

There is a proposal in the Wasm community, called Wasm threads proposal, that allows Wasm virtual machines to be able to process instructions in parallel.

The Go project could, at some point, evolve to support the Wasm Threads proposal, exposing an interface to execute the goroutine scheduler on multiple threads.

This might affect or not (depending on the future decisions) the execution model of the export, but without effectively changing the semantics from the user point of view, nor the interface described above.

For example, assume Go implements the goroutine scheduler on multiple Wasm threads, from the user perspective there is no semantic difference if the export function hello_world returns after all goroutines are parked or if it just returns as soon as HelloWorld completes.

Thanks to the Wasm interface types, we might be able in future to allow users to extend the set of supported types in the imports and exports signatures.

Like https://golang.org/issue/38248, the go:wasmexport directive will not be covered by Go's compatibility promise as long as the Wasm architecture itself is not considered stable.

The step (1) should look very similar to the work already done for the go:wasmimport directive, available here.

Step (2) will mostly require refactoring the runtime code already available to implement syscall/js.FuncOf (e.g. runtime/rt0_js_wasm.s), in order to generalize it to any export (and not just the built-in ones).

Step (3) might be required or not, depending on the outcome of step (2), in order to keep a correct implementation of the Go JS ABI, without changing its behaviours.